In December of that same year, Mel Waters would make his last public appearance on Art Bell's radio program, calling in to give an update on his story. He's calling in from his Nephew's apartment, and that is as specific as he wants to be. Mel, despite rumors, is in fact not dead, but he did have a brush with death back on Memorial Day.

​Mel talks about the story of the hole in Nevada, but doesn't want to specifically say where it is located at. However, the hole has been under helicopter surveillance frequently. But there has been no contact between the military and the Basque people in the area.

From certain approaches to the area that the hole is located, you are unable to see the metal collar from a certain distance. Only when you get within a specific distance will you be able to see the brim around the hole.

One of the Basques had taken some of the ice that had been lowered down into the hole home with him. He had placed some of it, still burning, in his wood stove in order to keep his house warm during the cold winter months. Mel thinks that the ice is still burning, even after all this time. The Basque noticed that the air in his cabin was always dry, he was constantly thirsty, and his skin was incredibly dry. One night, he noticed that the steam from the kettle was being absorbed into the stove. After returning home to his cabin, he discovered that the stove had crashed through the hearth of his cabin and sunk into the ground below. Since he had no other way to keep his place warm, he patched up the stove and left it where it was in order to continue using it for the warmth that it provides.

​After about a week or two, he comes home and finds that his entire cabin has collapsed and turned into dust as if all the moisture in the wood had been sucked from it. He leaves the stove, and the remains of his cabin, and moves in with his brother. After coming back to check on the cabin a month later, they discover that the stove had sunk about 5 feet into the ground and still generating heat. The hole made by the stove sinking down was incredibly smooth and unlike what you would expect a hole in dirt to be.

This is when the Basque gets a hold of Mel to tell him what happened, and Mel does something that he thought he would never do: he tracks down one of his contacts from Australia. The Official acts just as surprised as Mel is to find out about the second hole, and asks for directions to it with a sense of urgency. He gets them in touch with the Basque who owns the cabin, and they lead the Official's team to the sight of the "burnt" down cabin. The Basque wasn't sure if they were military or civilians. Mel thinks that some must have been scientists.

They bring out heavy duty machinery to the cabin sight. However, they are unable to lift the stove out of the ground, and begin to bring it larger, and heavier machines to try and bring it back up. They bring in wenches, cranes, etc. to no avail. The team decides to finally try and drop chains into the ground and pour water over them. They then are able to attach a number of different cranes to the stove and pull it up out of the ground and onto a large truck to take it away. The show takes a break here.

​Mel talks about how he feels as though someone has been following him, and that the people he was looking for before were somehow able to find him, even though he tries to stay as private as possible. He worries that if people are able to find him that easily, they will be able to find the hole. He gets badgered all the time, even though he doesn't have a nickel in his pocket. At this point, Art decides that it's best to move on from that topic for Mel's safety.

​The creature that had come out of the dead sheep they lowered into the hole had been returning and visiting the Basque people on numerous occasions. Mel mentions someone that had appeared on the show talking about the subject, a man named Red Elk (Gerald Osborne), who theorizes that the seal creatures are actually Rock Flyers. Supposedly of Native American legend, Rock Flyers live beneath the Earth and can travel to and from different dimensions. Art thinks that deep beneath the Earth, laws of reality could very well be different than on the surface, which would explain all the weird things related to the hole.

​On the topic of oddities, Mel talks about the replacement 1943 Roosevelt dime that was given to him by one of the Basque elders when he had visited the second hole. Much like the metal collar on the hole, the dime is unable to be seen with the naked eye from about 15 feet away. It's also not possible to take any sort of photograph of the dime or to scan it. Mel is still in possession of the dime, but he's unable to take any pictures of it at all.

​The hole in Washington is likely covered over, according to Mel, but the hole in Nevada is still there. Mel wants to get in touch with the Basque and bring it all to light. He thinks that it's dangerous, and that people should be aware of those dangers. He brings up a book by Kurt Vonnegut titled "Cat's Cradle" in which a substance called "Ice Nine" is created in order to solidify mud. But it converts all the water molecules on Earth into a solid, essentially destroying the planet. Scientists believe that this could very well be plausible, which is where Vonnegut got the idea for his book.

​​The Basque have discovered a way to communicate with the seal creature. They use one of their boomboxes, to which the creature speaks through. Mel isn't sure how any of that works, but that is what he hears from them. When they attempt to record the creature speaking, the recording sounds simply like an inter-modulation of bloops and bleeps.

The creature warned the Basque about the ice, and that it can and will destroy the world in a short amount of time. The lack of understanding of the ice and it's power, as well as the greedy and undisciplined use of it, is what will lead to the destruction of the planet. Mel wonders if there is a connection between crude oil, whale oil, and the Basque. And that the Basque had told him that they were the one's who put the whale bone in the tree in Ellensburg, WA.

The seal creature also said that there are intelligent beings on other worlds who have their eyes on this planet because of the shape that it is in. Those beings would be more than willing to inhabit our world if and when we destroy ourselves with nuclear weapons. The Earth is on a collision course for disaster, and other beings are planning on reaping the rewards of both the planet and the ice when we are gone. When the ice is discovered, it is almost always improperly used.

Art asks Mel to swear to get in touch with scientists, and Mel says that he will speak with the Basque about that. And with that, the show runs out of time.

​This would be the final appearance of Mel Waters on the show, and perhaps, the last any had ever heard from him. ​ 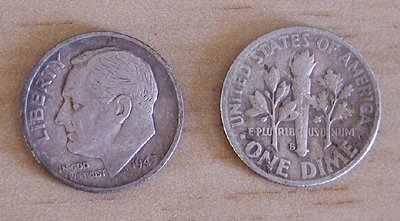 An example of a 1943 Roosevelt Dime with "B" mint. Likely fake, but a visual reference.

-You are unable to see the second hole's metal collar from certain distances.
-Mel's 1943 Roosevelt dime also shares this trait, and is unable to be photographed.
-The "fire ice" from the hole caused a Basques cabin to become incredibly dry.
-The stove that held the ice sank into the floor. And later completely dried out and destroyed the cabin.
-Mel got in contact with an Official who sent a team out to the sight of the cabin to retrieve the stove and ice.
-It took a number of large cranes a huge truck just to pull the stove out of the ground.
-The Basque had been visited numerous times by the creature from the sheep carcass.
-Mel mentions that a man named Red Elk theorizes that the creatures are "Rock Flyers" of Native American lore.
-The Basque communicate with the creature using a boombox, however they are unable to record it's voice.
-The Basque also claim that their people were the ones who placed the whale bone in the tree in Ellensburg, WA.
-Mel thinks the ice could be like the fictional "Ice Nine" in the book "Cat's Cradle" by Kurt Vonnegut.
-The creature claims that they can travel between different worlds, and that we are not the first to discover the ice.
-They also say that we are doomed to use the ice in an improper way and destroy the planet.
-Other beings on similar planets to ours are waiting for our destruction to move in and take advantage of the ice.
​-This is the last call Mel Waters ever made into the show.