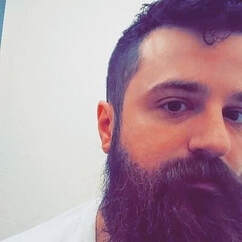 I felt as though I should update this section of the site to include more about myself and to give my readers a better idea of just where my own ideas come from and how my writing style has been influenced by my life experiences.

​I was born on an Air Force base in California, and was raised in a few different places before settling in Indiana. I played baseball my entire childhood and into my teenage years. I was a pretty typical kid, but always preferred being alone when I could be. I had continuous "story lines" for most of my toys; Jurassic Park and Star Wars figures being the most often played with. Creating stories that lasted for years was something that I had been doing even at an early age, and that's something I do even now, just in a different way.

There had always been interest in art and writing, but I didn't focus much on it as a child. I did, however, write my first book (Dan and the Treasure) during 1st Grade. Most of the writing I did early in life was thanks in part to school, and especially the last few years of High School. At various times growing up I became interested in different medias, which is still true even now. But writing was always the one that I seemed to have the most natural ability in.

During my Junior year, I read the book Black Hawk Down, which documents the 1993 Battle of Mogadishu from the eyes of the men who fought during it. Military History was something that I always enjoyed reading and learning about, and my family has a long history of service. I wasn't sure what I wanted to do with my life, but after reading that book and seeing the sort of bond that is made between Soldiers fighting alongside each other, I knew that I wanted to be part of that brotherhood.

I hadn't even turned 17 yet, and I had already contacted a Recruiter. I told her that I wanted to be an Army Infantryman, and that I wanted to serve. This was the summer of 2002, and the war in Afghanistan was still fairly new. Iraq wasn't even something anyone had thought about since Desert Storm. She told me that I had to wait until I was 17 before she could actually talk to me, and that I would need my parents to sign off for me to enlist. I spoke with both of them, and they just wanted me to do something that I would enjoy. So I signed up and went to Summer school in order to finish my Senior year in half a semester.

The next summer, I found myself in the heat of southern Georgia learning how to professionally kill people. I was still just a kid, but young men had been fighting wars for our nation since we left England. When I signed my contract, I decided to pick Fort Drum, NY as my first duty station. The Invasion of Iraq had kicked off, and the world was becoming a rather scary place. I actually ended up in the same unit that had helped the Rangers and Special Forces escape Mogadishu. I lucked out, in a way, and joined a unit that had just gotten back from a short deployment to Iraq in support of SF. So we had about nine months to train and prepare for an eventual 12-month deployment that would come the following year.

We drove up to Baghdad from Kuwait in early July of 2004, and spent a year fighting the growing insurgency. The initial push into the country was done poorly and left far too much for the "bad guys" to get their hands on, which we felt the brunt of a year later. All told, my Company was lucky enough to not have anyone killed. We did take a heavy amount of injuries, some severe, and our Battalion lost over a dozen men in the year we were there. I had many close calls throughout the deployment (hitting I.E.Ds that just did minor damage, mortars hitting and being saved by my helmet, and grenades landing in just the right spot as to not get hurt) but was doing a good job of avoiding danger. That changed in early April, when I was burned in a car bomb attack. I ended up with a Purple Heart, Combat Infantryman Badge, and Army Commendation medal for my tour overseas.

​I was a good Infantryman, and ended up in a leadership position after only a couple years. I became a Sergeant at the age of 20, and was leading a team of new Soldiers to prepare to go back to war. I reenlisted to become an Instructor at the U.S. Army Infantry Center. It was around that time that I began to suffer from symptoms of both PTSD and Traumatic Brain Injury. This was during a time in which the Army had no real idea how to handle Combat Veterans who experienced trauma, especially in regards to the TBI problems. I had daily headaches and migraines, mood swings, major sleep issues, and a collection of other symptoms that made it difficult to function. It lead to a medical discharge in 2008.

​My dreams of serving 20 years and retiring came to an end after only 5. I'm very proud of my service, and the connection I made with my fellow Infantryman is something that I will never forget. I love all those guys, and miss them every day.

I wasn't sure what I wanted to do with myself when I got out, because I hadn't wanted to be anything but a Soldier. I eventually enrolled in college, which is where I began writing more often. First, because of classes that required it, and then eventually creating things on my own for personal enjoyment. I wrote poems, short stories, character biographies, and just about anything that came to mind.

​I still struggle with my health in relation to my time overseas, but I've been able to use writing as a way to express myself and help heal in a way. It allows me to think creatively and try new things. It's sometimes difficult for me, in part because I still have symptoms of the TBI and headaches, but I do my best to work through it. I'm very critical of myself and my ideas, and I feel that I have to be because I know that I'm working through those issues. Writing has become my outlet and I'm glad that I've been able to share it with others now. I hope to maybe inspire others who are suffering from some sort of issue, but who are creative, to continue to work on their craft.

I published my first novel, It All Fades, in 2013. I created this site as a way to keep all my projects in one place, and let others share in my creations. I've got plans for many different stories and appreciate all the good will and support I've received thus far from my friends, family, and strangers. My style of writing may not be a fit for everyone, but I'm glad some enjoy it. (I blame the Army in part for adopting Hemingway's Iceberg Theory, as I learned to be very succinct in everything I did.)

If you're a fan of anything specific that I post, or would like to see more of something that I may not do as often, please feel free to get in touch with me in one of the various ways below. Thank you to everyone who has taken the time to read this, and to visit my site.